Source: Mostly from Brazil but found all around the world. The most common crystal on earth.

Unusual Properties: Many possible. Here are some interesting ones.... 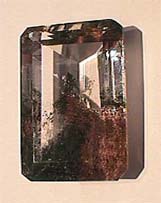 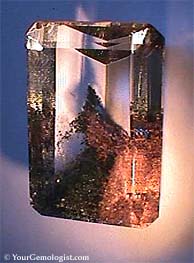 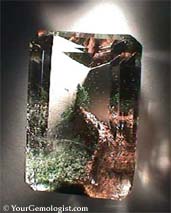 Above you see a the same quartz crystal in various types of light. The first photo shows the crystal the included green chlorite inclusions with the brown inclusions that are most likely iron deposits. The side photographs show transmitted light through each side giving a vivid demonstration of the coloring of these inclusions.

This classic phantom crystal in a quartz crystal is a great example of twinning or two crystals growing in the same place at the same time. Interesting point of this specimen is that the cutter was able to facet the stone in such a manner that the point of the faceted finished gemstone was oriented in the exact direction of the phantom crystal that had grown within. Phantom crystals occur in many type of gemstones.

Above you will see a very common and quite beautiful example of included rutile needles, both as an inclusion in a quartz crystal, and in its native form loose in an intertwinned growth. Rutile needles are often found in a variety of gemstones including quartz and ruby. And they have an appearance of long needle-like inclusions as seen above. They also occur in the same form as other needle type inclusions including the minerals tremolite and actinolite. It is interesting to note that an old name for this type of quartz is "Venus Hair". Not hard to figure that one out.

Here you find a fairly common occurrence of tourmaline needles inside a quartz crystal. If you will refer back to The Gemstones page of Tourmaline you will find a rather large tourmaline crystal embedded in a white quartz matrix. The interesting point of this example at left is that the crystal is very clear and the tourmaline crystals are rather small. Making it appear that the quartz crystal simply has a lot of little black lines running through it. Just an interesting example of tourmaline in quartz.

Don't run for the door. This common variety of quartz has many, very tiny asbestos inclusions that have all lined up to produce the effect that is known as tiger eye. This type of quartz is quite common and the asbestos is locked up in the quartz crystal so that there is no harm in wearing this gemstone everyday.

I do not have any reason to offer as to why they call it tiger eye, but since a lot of it comes from India I can only guess that someone was getting chased and ...well never mind. Not sure where I was going with that one anyway. But it does make a nice looking gem material.

This type of included quartz is due to various type of oxides that are present in the quartz crystal forming the interesting pattern of inclusions seen at left. Sometimes called moss agate due to the pattern of the inclusions, these occur in a variety of colors and from a variety of locations. Some experts can determine the origin of the dendrite quartz by the color and formation of the moss formations.

There are many, many other types of inclusions that occur in quartz. In fact, we could do an entire website just on quartz. But then we would miss a lot of other interesting stuff. So for now, enjoy the examples above. And let me know if you find others you would like to add to YourGemologist.com.

Back to Mineral Index Page

Back to Home Page